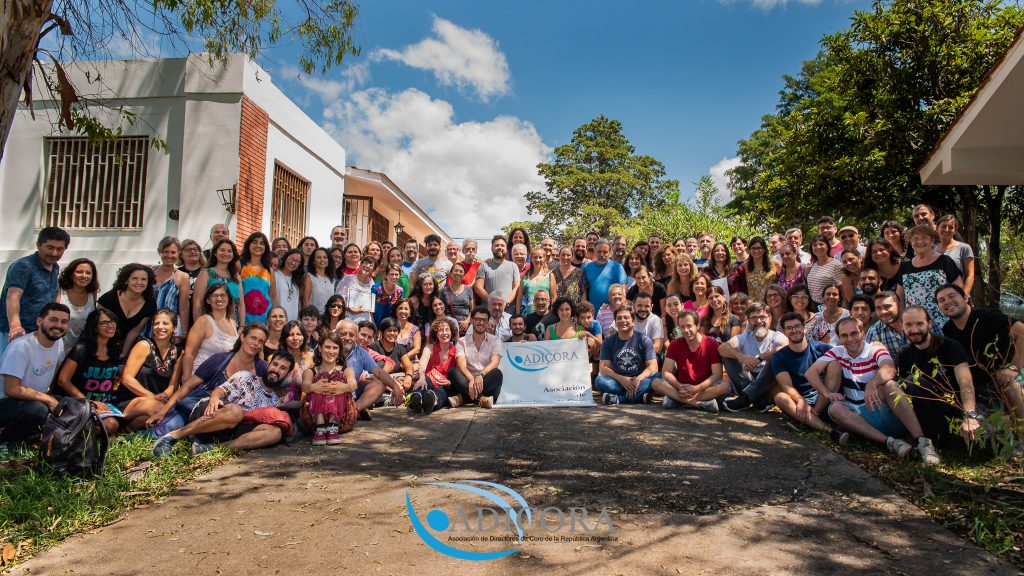 ADICORA is the acronym in Spanish for Association of Choir Conductors of the Argentine Republic.

ADICORA emerged from the need to have an organization that gathered and represented the choir conductors of the country. With this aim in mind, representatives of the choral activity in Argentina began to meet so as to form a council that could bring them together. Its principles and main objectives are currently the basis of the Association’s Statute.

Argentine choral activity development, compared to the European one, is very recent. Argentina opened the door to a huge number of immigrants who settled in different regions of the country, all of them brought along their own traditions and cultures. Some examples of this phenomenon are the German colonies in the north-east, the Welsh settlements in Patagonia, and the Spanish and Italian communities scattered throughout the country. In this context, university choirs and choral groups of immigrant communities arose around the 60’s and their repertoires were associated to the European tradition.

The Association of Choir Conductors of the Argentine Republic was established in March 2003 after a one-day-long debate among colleagues from all over the country who understood that the future of choral music could not continue its development on the grounds of mere ideals. It was imperative to materialize them in an institution that not only represented the conductors, but also laid the foundations to continuous growth.

The Association has an Honorary Advisory Council whose members are choral activity personalities who have been conferred such honors because of their recognized and indisputable careers and/or important services rendered in managerial functions within the Institution. At present, the members of this Council are: Maestros Alberto Balzanelli, Roberto Saccente, Mario Videla, Rodolfo Van der Meulen, Néstor Andrenacci, Héctor A. Nardi; Hugo De la Vega, Carlos Lopez Puccio and María del Carmen Aguilar.

ADICORA’s objectives involve promoting a greater consolidation, growth and prioritization of choir conductors’ roles and choral activity in general, as well as fostering and organizing training courses, congresses, seminars and workshops. ADICORA is also focused on being the associates’ representative before official, private and non-governmental organizations, in those matters involving their professional tasks. Its responsibilities also imply preparing normative and/or collaborative projects, as well as requesting and accompanying the authorities in matters such as creation, recreation, interpreting and/or disseminating choral music.

ADICORA has already been recognized as a genuine reference in choral activity by all the local and foreign governmental, educational and cultural spheres. In July 2017, ADICORA actively participated in the World Choral Music Symposium organized by the World Federation of Choral Music, and held in Barcelona, Spain. On that occasion, given the massive participation of Argentinian conductors, the creation of the “ADICORA Choir” was proposed and it was formed with choir conductors from all over Argentina. The program exclusively contained academic and folk Argentine music and it included the best musical expressions of our culture. In this way, the rich choral activities developed in our country could be shown to the world.

Thanks to this experience and its significance for the participating conductors in terms of professional growth and learning, the Association decided to take Argentine choral music to other choir festivals in the world. Thus, the Adicora Choir participated in the World Choir Festival of Puebla, Mexico in 2018. A new challenge came up in September 2019: participating in the “1st.Meeting of Choir Conductors” in Brasilia, Brazil, which meant sharing workshops, concerts and lectures with Brazilian conductors.